Globally we saw a 2.4% increase in percentage viewership by women in 2017 as women made up an ever larger part of the overall viewing community. This is trend we’ve seen consistently in recent years. Not only are more women coming online, they’re coming at a greater rate than men are.

The real story might be emerging markets. South Africa and Saudi Arabia both saw double digit percentage of women in their audience, reflecting changing attitudes towards adult content, particularly among younger viewers.

Meanwhile, increased restrictions on adult content in countries like Turkey led to fewer women taking the risk of going online. And while women of South Korea increased in total number, they fell as percentage of the total viewing population.

You can see the difference in the two graphs below.

Second, easier access to adult content has meant that women can enjoy with less stigma. There is still a misconception that women do not enjoy adult material. Data is proving that wrong.

Globally, women now make up 26% of the audience. Of course, some countries those number still have a ways to go.

But they’re also increasingly affecting what is most popular.

The top search results for overall in 2017 were:

However, look how that changes when we segment out men and male-identified visitors. 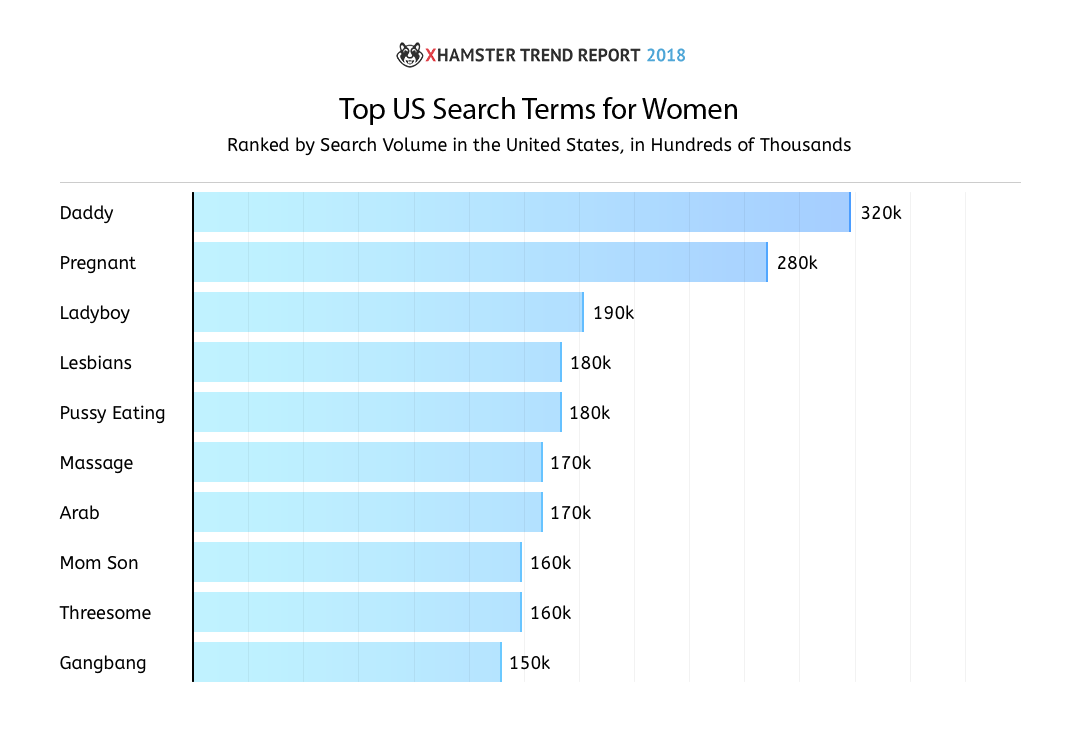 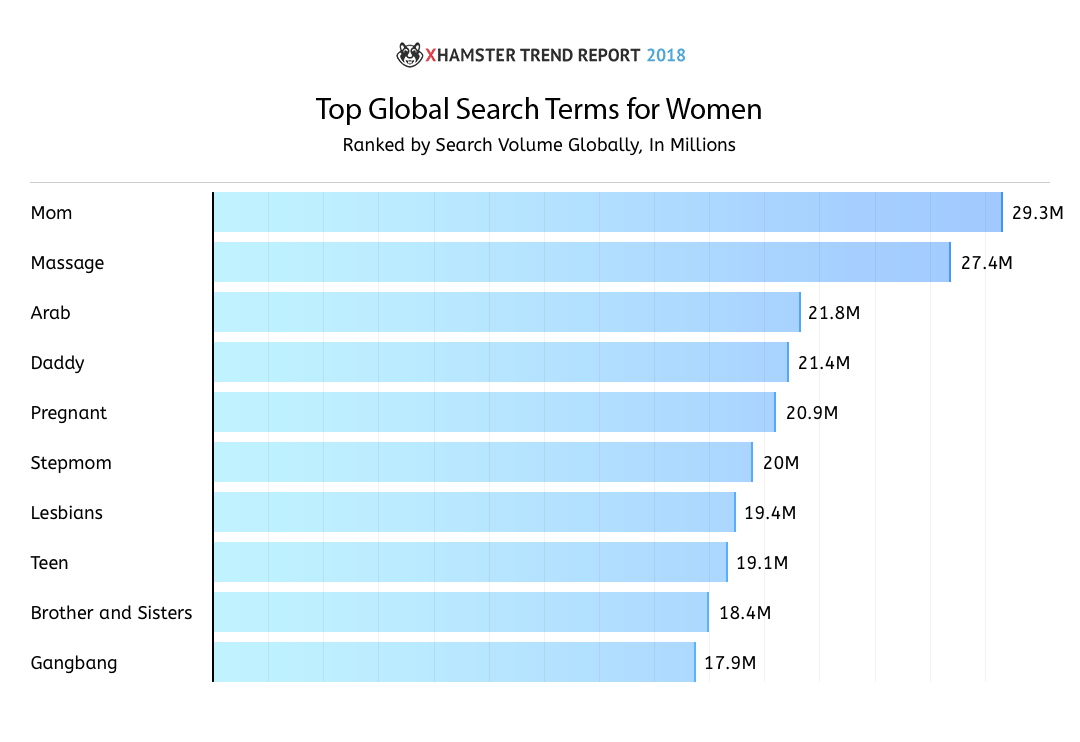 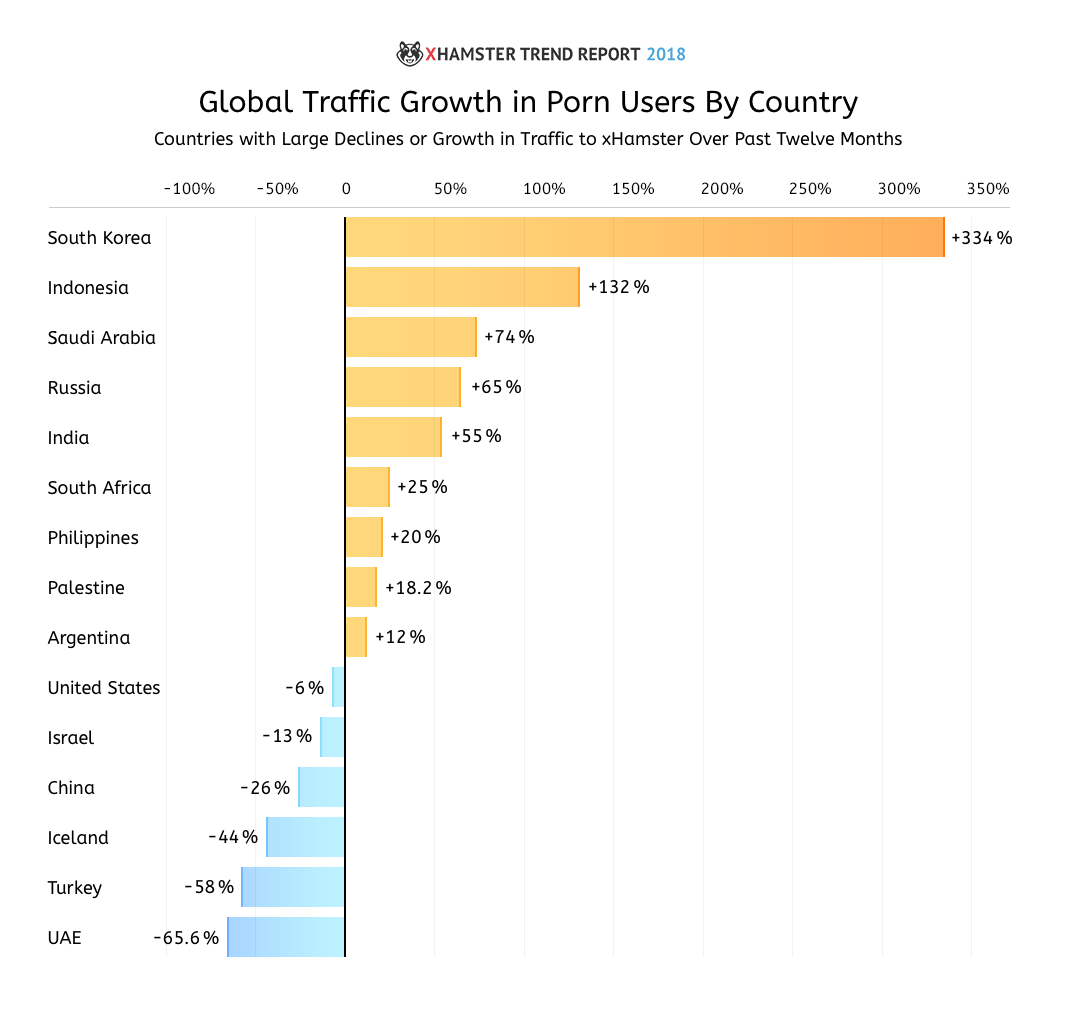 We’ve also seen a shift in who we’re watching. Continuing a trend we’ve seen in years past, viewers are shifting away from lighter complected ethnicities, like German, Italian and French, to more Mediterranean nationalities. (Japanese still dominates searches, but even it is down 37% from just a year ago.) 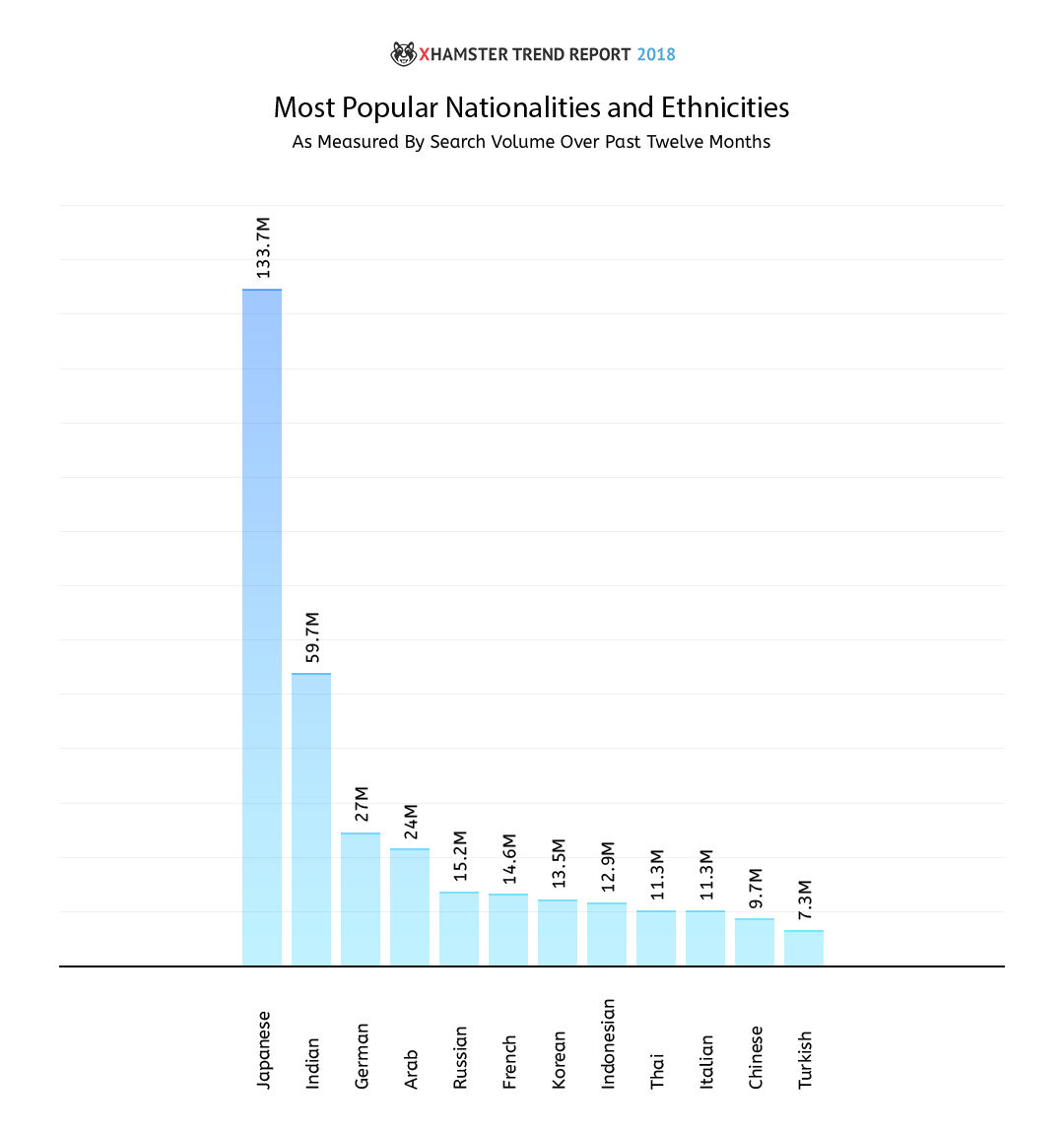 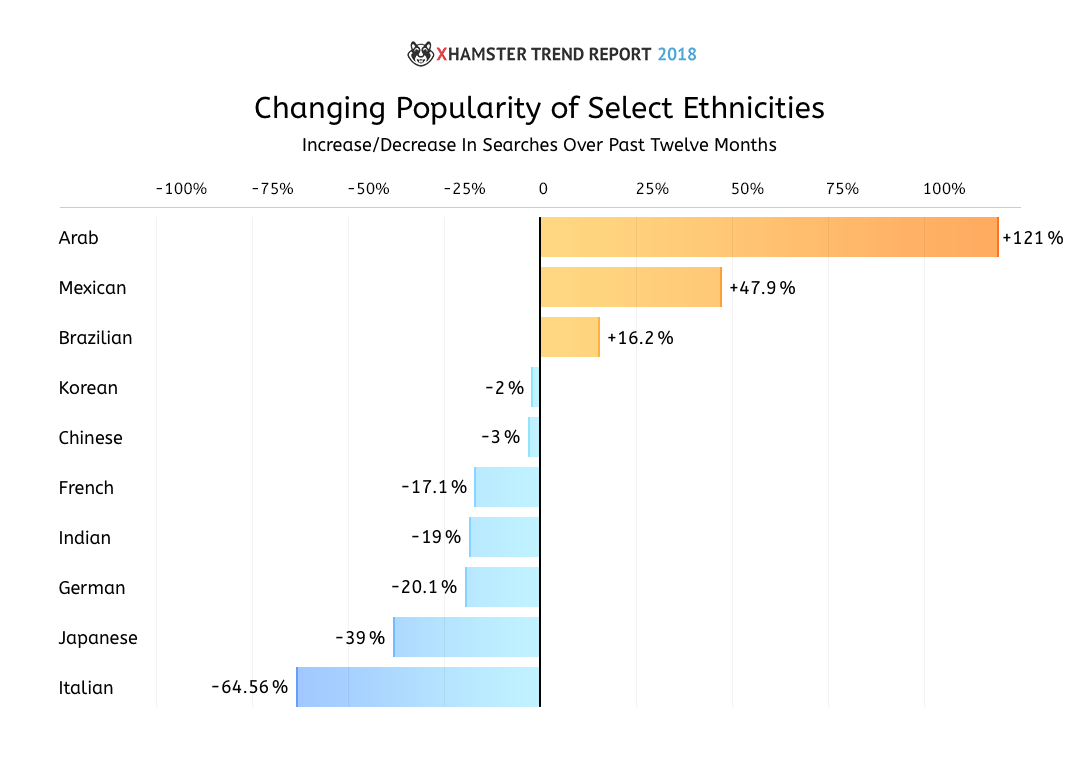 Did the Trump election augur a more conservative sexual future? 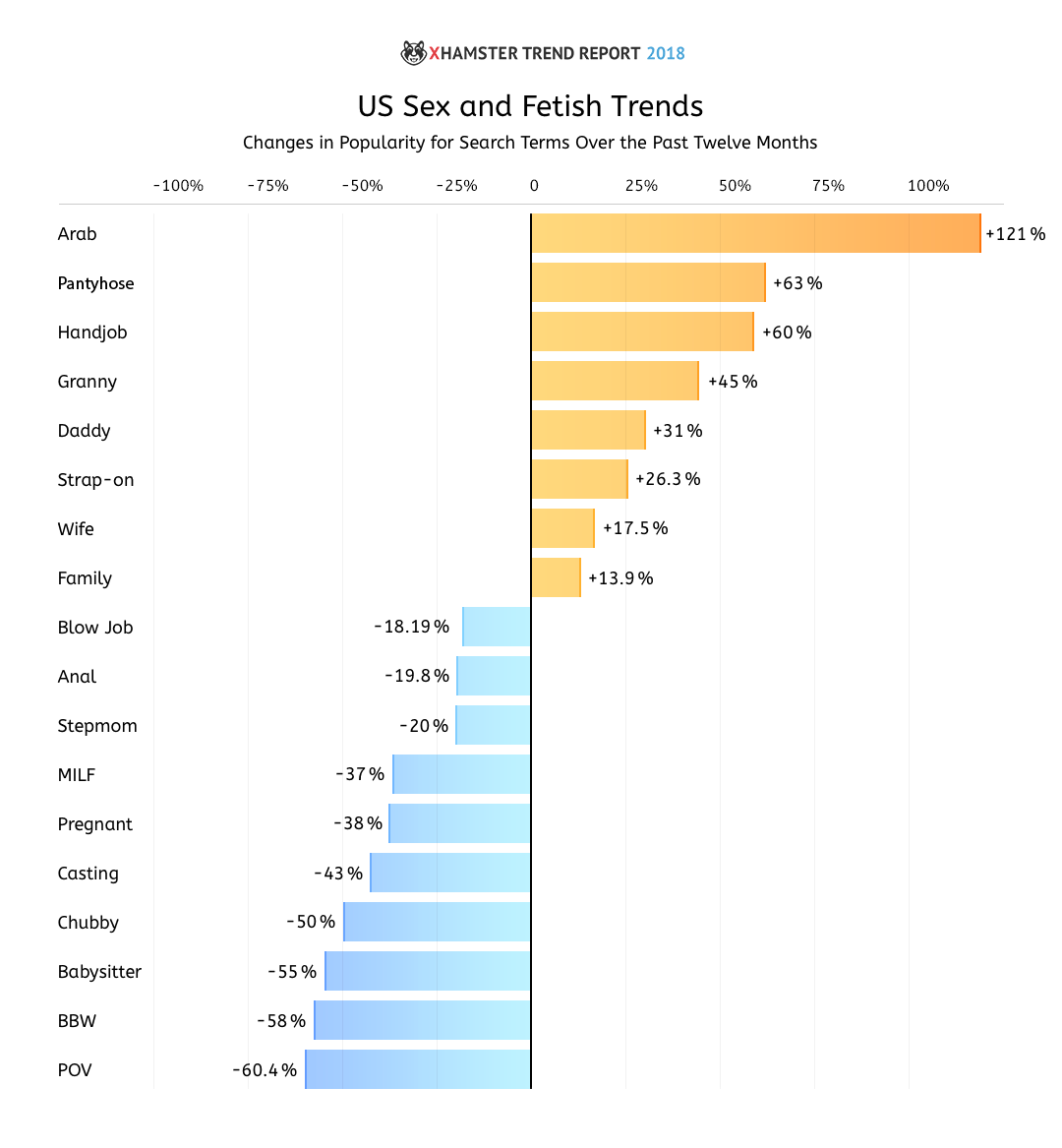 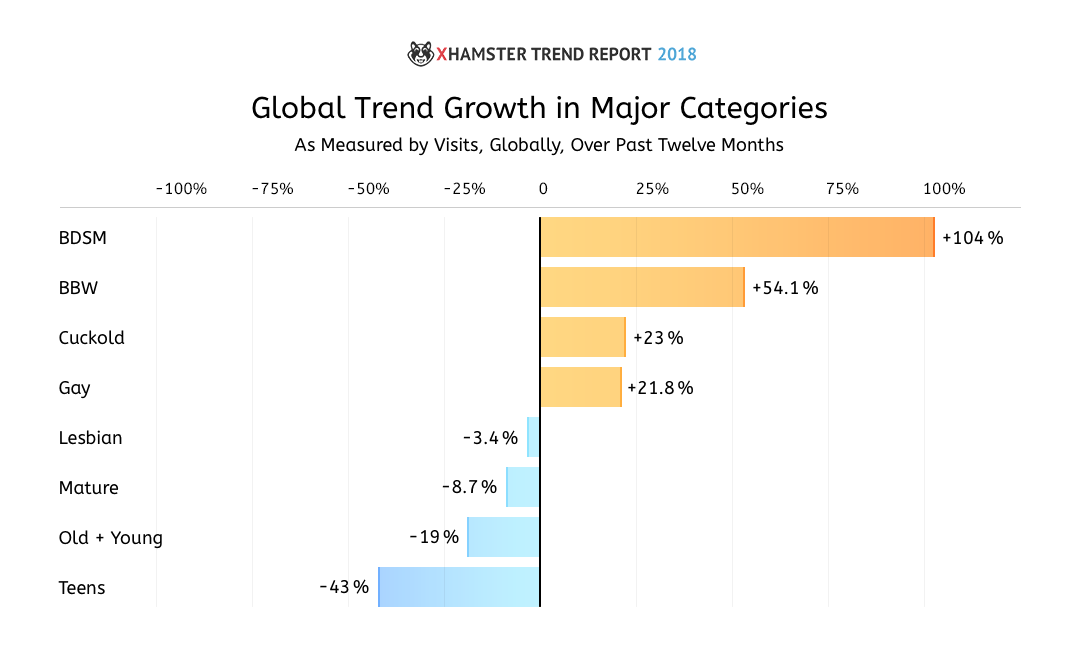 The above just amounts for some of the data we looked at this year.

A More Diverse Cast
For years, lighter skinned performers have been the most sought after — particularly by US audiences. But global trends — and the popularity of Mia Khalifa — seem to be shifting audiences away toward performers and productions from away from those with European or Japanese features, to those with South American, African, Southeast Asian and Middle Eastern ancestry.

Tech Surge
VR production and consumption still has its challenges, but the audience is growing at a rapid clip. We saw a 47.4% jump in searches for VR over the past year, and we expect that audience demand in 2018 will drive innovation to make the videos better and more accessible. We’ve even launched a platform to make it happen.

We’ve also seen interest in sex dolls nearly double in the past year, with a 97.4% jump in search frequency. We introduced the crowd-designed xHamsterina this past summer, and intend to push more heavily into this field in the new year.

We’ll be digging through data throughout the new year, to help fans and producers better understand the changes in the industry. Have a question, or want a deeper dive on the data? Reach out and we’ll help you understand how our dynamic world sexuality is changing!

julie_van01q
I'm wondering how these results may impact what erotica authors focus on?
2 years ago
Reply
P

Alice_and_Abel
Thanks for the info :)
3 years ago
Reply
S

SissyCharlie
Thank You, Alex, for crunching the numbers for Us.

nick61
Very interesting
3 years ago
Reply
Scuzz_Twittly
The only problem is we cannot upload content with half of these terms without the content being deleted. If I post anything saying Mom Son, Mother, Stepmother, Stepmom, Daughter, Father, Daddy, Celebs, Celebrities, Famous, or dozens of other terms, the content simply goes into a hold queue, then gets deleted within the hour. So while it is fascinating to read about trends here, it does not matter to common users since we cannot add content to so many of those terms.
3 years ago
Reply
L

mmmbrunettes
So cool to see the change keep us informed!
3 years ago
Reply
T

tiny1910
I always enjoy this list each year, glad to see the female vote is starting to be heard better.